The purpose of the organization is to participate in the religious, charitable, and educational Apostolates of the Church. Catholic Daughters of the Americas engages in creative and spiritual programs which provide its members with the opportunity to develop their God-given talents in meaningful ways that positively influence the welfare of the Church and all people throughout the world.

Catholic Daughters of the Americas strives to embrace the principle of faith working through love in the promotion of justice, equality and the advancement of human rights and human dignity for all.[/vc_column_text][vc_column_text]

About Catholic Daughters of the Americas

The CDA was formed over 100 years ago and today numbers 66,000 dues-paying members in 1,150 courts (local chapters) in 45 states across the country and in Puerto Rico, Mexico, Guam, the Virgin Islands, Kenya, and Peru.

Catholic Daughter women enjoy each other’s company at meetings and work hard for their parishes and communities.

Deeply spiritual, together they share faith, love of God and a distinctly feminine spirituality alluded to by Pope John Paul II when he spoke of the necessity of “feminine genius” in today’s world.

The program includes concerns of today’s church and society as well as issues that affect the well-being of women and children.

The Legislative Program encourages interested members to learn about laws that may influence their faith and to contact their state representatives to make their personal positions known through Operation Morning Star [The Catholic Daughters of the Americas does not endorse political candidates].

Girls and young women ages 6-18 can join the Junior Catholic Daughters of the Americas.

Young college women can become members of Campus Courts at some universities.

[/vc_column_text][vc_accordion][vc_accordion_tab title=”Why Join?”][vc_column_text]In addition to opportunities at the local and national level for fellowship with other Daughters who pursue our mission of faith working through love in the promotion of justice, equality, and the advancement of human rights and dignity for all, Daughters experience the opportunity to give and receive. By giving of your time, talent, ideas, knowledge, dedication, and enthusiasm, you’ll receive spiritual enrichment, leadership skills, affirmation, community, broadened horizons, and a marked sense of accomplishment. Daughters also receive SHARE, the award-winning, quarterly magazine of the Catholic Daughters of the Americas.[/vc_column_text][/vc_accordion_tab][vc_accordion_tab title=”What We Do”][vc_column_text]Catholic Daughters engage in an expansive array of activities in pursuit of our mission including:

The programs cover a vast scope of activities beginning at the parish level and expanding into all concerns of today’s church and society.

Regular meetings of the local courts are held once a month, with a minimum of 10 meetings a year.

The Catholic Daughters of the Americas is one of the largest Catholic women’s organizations in the world. Founded in 1903 by the Knights of Columbus, the organization has flourished under the motto of “Unity and Charity.” Currently approximately 70,000 Catholic women are members. With the guidance of the Blessed Mother as their patron, Catholic Daughters is a group of “God’s Active Angels” reaching out to others with helping hands, having a good time, gaining new friends, and offering help and understanding to all.

Membership in the Catholic Daughters of the Americas organization is possible for women 18+, girls 6 to 17, and ladies attending college. Any woman of the Catholic faith who wishes to belong to CDA is welcome to join. Girls 6 to 17 years of age can join JCDA in an area where the adult CDA court is established, and ladies attending college may join their Campus court if one is established.[/vc_column_text][/vc_accordion_tab][/vc_accordion][/vc_column][vc_column width=”1/2″][vc_column_text]

The Structure of the Catholic Daughters of the Americas

The Courts
Five or more Local Courts in good standing with a total membership of not less than 200 members, may organize a State Court with the approval of the National Board. State Courts shall be composed of a National Regent or her representative, 5 State Officers, Past State Regents, and Local Court Regents and delegates from Local Courts. State Courts elect 5 Officers at their Biennial State Convention. Only one State Officer can be elected from a Local Court. Exception: In states with twelve (12) Courts or less (2) officers may be elected from one (1) Court.

State Board
Each State Court shall have a State Board consisting of the National Regent and 5 State Officers. The State Board shall meet quarterly or as often as necessary in order to discuss the program of THE ORDER in the State. State Courts shall convene biennially between March 1 and May 31, in the alternating years to the Biennial National Convention. 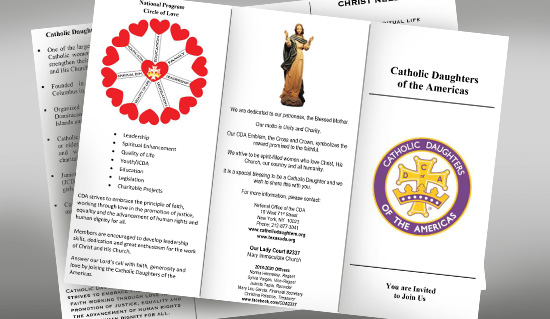 An overview of our Catholic Daughters of the Americas 2337 Dallas membership.